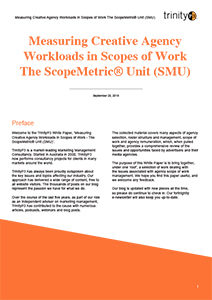 To receive an email link to download this white paper
please complete and submit the form below.

By 2019, the average creative is completing between 4.1 and 5.0 SMUs per year – an acceptable range of productivity. However, as agency fees continue to decline, while SOW workloads increase, agency creative staffing is under downsizing pressures, and creative productivity levels are increasing above 5.0 SMUs per creative per year. This is not a healthy trend.

When SMUs have been calculated for a given SOW, a number of key metrics can be developed:

Simply fill in your details to download the White Papers.

Stay up to date

Simply fill in your details to subscribe to our regular updates on marketing, media and advertising.

The team at TrinityP3 is the best in field, incredibly helpful with a broad range of experience in Marketing and Supplier management.