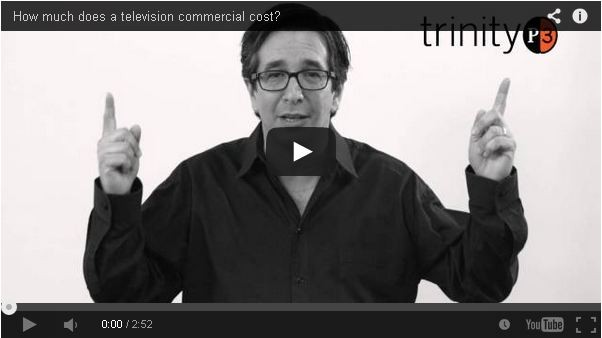 Every so often you read in the trade press about the death of television. But in fact television is alive and very well. It is just taking on new forms in the shape of video on demand (VOD) and online video as well as the traditional 30 second TVC.

So, how much does a television commercial cost?

How long is a piece of string you say? It is a common question that does not come with a straight forward answer until now. Here, I offer a new perspective on this common question around television production costs and budgeting.

How much should I spend on a television commercial?

One of the common questions I get asked is “How much does a television commercial cost?”

Well it depends on the concept.
It could cost as little as a couple of hundred dollars.
Or it could cost many millions of dollars.

Now of course, before we even go into discussing if it should be a television commercial, lets assume you have the money to pay for the media, which is not cheap.

Of course it could be that you have no intention of playing it on television, but instead are hoping it will become an Internet sensation. But of course then it is NOT technically a television commercial, is it?

Either way, this approach still applies.

What is your commercial trying to achieve?

It is simply a handful of simple questions that can often have difficult answers:

First, what is it you want this commercial to do? I don’t mean what do you want in the script, I mean what is it trying to achieve?

Whatever the objective it is important to have this front and centre and be clear on how valuable and important this is to you.

How much are you willing in invest?

Second, how much are you willing in invest to achieve this?

This is the total budget, media and production. Now your media agency will be able to tell you how much you need to achieve the reach and frequency, that is to have enough people see this commercial enough times.

If you have not got the budget to make sure people will see it then perhaps it is time to think of another media channel.

You may be tempted to go for that elusive Viral Internet Sensation. If that is the case then due to the high failure rate I would suggest keeping your production investment to a minimum. That way if at first you don’t succeed you can afford to try, try and try again.

How long do you intend to use your commercial?

Third, how long do you intend to use it?

Is this a six-week sales / retail promo or is this a long-term brand building exercise? The media level and duration will give you an indication of the burn out rate.

With these three little answers at TrinityP3 we can then calculate the production budget required based on industry and category experience and expertise.

Then it is simply a matter of briefing the agency to create the best possible commercial idea within the budget. Which is always easier than trying to reduce a champagne idea to fit a beer budget.