The ethics of Client / Agency behaviour: What is acceptable and what is not? At the inaugural Mumbrella Asia 360 earlier this month Julian Barrans, Asia Business director and I curated a session on client / agency behaviour based around real life examples of dubious incidents we had either witnessed or had heard about from reliable sources. We put these to the audience to gauge what is acceptable today and what is not.

The world of marketing, media and advertising is changing rapidly, especially driven by technology innovation, which is multiplying opportunities and options and magnifying pressure and demands. But has this impacted the way we work together? And if so how?

To help us explore the behaviours, we recruited two experienced representatives from marketing and the agency world to provide their insights. Our marketer was Virginia Ng, former senior marketer at KFC and our agency leader was Susana Tsui, CEO at media agency PHD APAC.

Each provided their unique perspective to question and interrogate the scenarios presented and provide their insights and feedback on the behaviour before we put the ultimate judgement to the audience that attended the session.

Here we present the same scenarios presented on the day at Mumbrella Asia 360 in Singapore, along with the points and viewpoints raised on the day. But more importantly is for you the reader to provide your thoughts to what is acceptable today and what is not?

Only by the industry considering and discussing these issues can we encourage positive and productive behaviour and discourage the negative and destructive behaviour.

Scenario One – Charitable Mark Up

A marketer has a charity they support as part of their marketing and corporate strategy. But at a fund raising event they realise they have no way to make a charitable donation to the charity on the night so they ask the agency to make a sizeable contribution of $50,000. The agency CEO agrees. Later that month the Marketer receives an invoice for the $50,000 donation along with the agency 10% commission and the 7.5% service fee as per their contract”.

There was 100% agreement from the audience that this was unacceptable on the part of the agency, but some of the audience believed that it was also unacceptable for the marketer to put this on the agency. One agency said that worse than this scenario, they had a client ask them to make the donation as an agency with no intention to recoup the fee at all.

The award winning Executive Creative Director of a major network agency has a favourite production company for their client’s work. As he explains to his clients “they have the best directors in the region and the only ones with the talent and ability to deliver my creative vision”. He has placed around 80% or more than $USD 12 million in production with this production company this year and while the productions are not cheap, none of the clients complain about the quality of the end result. What the clients do not know is that the production company is owned by the ECD and his brother, who are silent owners”.

This was seen as 100% unacceptable even when it was revealed that the ECD thought everyone knew about the arrangement as it was agreed with the agency as part of their remuneration package.

Even though the clients had not complained about the cost, it was still seen as misleading and deceptive behaviour on the part of the agency. Some of the audience from major organisations pointed out that most have rules and guidelines that would prevent this happening but also recognised that this was not uniform across the industry.

An advertiser from a major family owned business approaches their media agency to buy what is clearly a premium package of Out Of Home media. It would represent a significant part of the media investment for that period and it would be a slight shift from media strategy to date. But confidentially the advertiser shares that it comes with a sales incentive of two tickets and accommodation to the annual Cannes Creative Festival. The advertiser would like the media agency to recommend the package as part of the media strategy and then to organise for the advertiser to “win” the trip as ‘client of the month’ or some other pretence”.

Many picked up on the fact that it was a family owned company and asked if the marketer was one of the family, in which case were they one of the owners of the company. Some felt that as one of the owners then this would be acceptable as it was after all their own money. However someone else pointed out that if it was acceptable then why was the sales bonus to be awarded in such a secretive way.

It raised the issue that the media often uses gifts and sales incentives to secure media spend and that these gifts could be seen as corrupting if out of control. A few marketers in the audiences pointed out their organisations did not allow them to accept gifts or at least not gifts over a certain financial value. But this practice was not wide spread amongst agencies.

The issues and nuances of this scenario left the audience split approximately 60/40 that this was unacceptable behaviour by the marketer and it was best avoided by the agency.

An agency has been building a relationship with this Marketer, who decides to brief them on a project to test them out. The agency, enthusiastic to please, develops the strategy, the brief and an extensive range of creative concepts and executions. The agency presented three separate campaigns and multiple executions of each campaign. The work was liked and accepted in the presentation and then the agency heard nothing for months. The agency sees their work start to appear for the client and decided to contact the marketer about payment. They are then told it was a pitch and that the campaign that is running was developed by the incumbent”.

This was seen as a very common occurrence in the region and one that is 100% unacceptable on the part of the advertiser / marketer. But it was also pointed out that agencies often contribute to this behaviour as they are over enthusiastic and eager to participate and therefore will often rush into the opportunity before completely understanding what is required and the terms of the process.

If procurement is involved, this will occur less often as the process of providing an RFP or RFT would completely define the terms and process of the selection process. This could be achieved simply by the marketer being clearer in their communication and providing clear and written instructions to the agency.

A senior male marketer and their agency account director commenced a consensual sexual relationship. Immediately the agency managed to increase the amount of work they did for the client. Everyone on both the agency and client side accepted the relationship, but it was never directly discussed. The client decided to review the agency relationship and put the account to pitch. A competitive and larger agency was successful in winning the business. Within a week of the account being awarded the agency account director resigned to commence the new job as Head of Client Services at the new agency on a significantly increased salary”.

This scenario was seen as acceptable with approximately 80% of the audience supporting this. This may be due to the human interest in the scenario with one audience member spontaneously asking if the marketer and the account director were still together?

It was also pointed out that it is normal for key agency staff to move agencies when an account moves from one agency to another. Also there is no proof of collusion between any of the parties and so while it may not look professional it happens often and is seen as generally acceptable by the industry as large.

Do you have any scenarios to share from the industry that are ethically challenging? Please feel free to share these with us here.  We will keep these confidential and share them anonymously with the industry to stimulate discussions on what is acceptable or not. It is one way we can start to bring about ethical change in the industry. 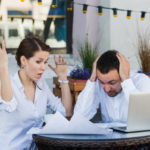 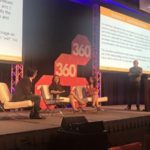