An abridged version of this post appeared in Mumbrella Asia on February 26 2014. It appears here in full.

You are trying to woo a client or even better they are trying to woo you. But how do you spot a tyre-kicker from the real deal? Or know they are not simply going to take you for a spin around the block before dumping you on the pile of rejected agencies?

Here are eight simple things to look out for and if you see them then run a mile.

1. Past behaviour is the best predictor of future behaviour. So if they change agencies on a regular basis then prepare to be used, abused and dumped.

Early on in running this business, there was a client known for switching agencies on a regular basis (annually) and I thought it would be a great business building idea to get the gig (regular work) but in the meeting with the client it became clear as to why they pitched their agency regularly.

The Marketing Director spent most of the meeting not talking about process, but about how he loved having the agencies fawning all over him with invites to sporting and entertainment events, lunches and dinners and even holidays packaged up as conferences.

Near the end of the hour long discussion about his love of pitching I finally got to ask about fair process and due diligence and he looked me in the eye and said he had that under control. He simply sent out a few briefs to agencies that had made an impact and appointed the one that he liked.

2. Respect is a mutual attribute. If on your first meeting they leave you waiting in the reception area for more than 15 minutes without apology, then it is a good sign there is no respect.

I have written about this previously, as have my colleagues in the industry, which you can read here. But I know several marketers who spend their whole day running late, except when the meeting is with their boss.

I know this because I have seen and heard of examples where having left the agency waiting for 20 minutes past the start of their meeting, they have cut the meeting 10 minutes short for a meeting with the CEO. It is an interesting observation because running late in this case is not a sign of poor time management, it is a sign of respect and the longer you are left waiting in the reception area of the foyer the less respect they have for you.

3. Are you as important to them as they are to you? If they cancel and reschedule meetings with you at the last minute more than once it is a good sign you are not.

Sure, unexpected circumstances pop up. Illness, emergencies and the like. But cancelling a meeting at the last minute and having to reschedule the meeting again and again and again poses the question “What is continually more important?” In some markets and some cultures this is seen as acceptable as a sign that the person is busy and important, but you are not?

I know of a senior account director who took to sitting outside the marketer’s office as it was the only way to get work approved or invoices approved because meetings were regularly cancelled. But how effective is this as an expression of a master / servant relationship where the marketer had the agency literally at their beck and call?

4. How they treat their incumbent is how you will end up being treated. So if they openly criticise their current agency with you, just remember that will be you one day soon.

As a pitch consultant it is my job to hear the marketer’s complaints about their agencies. After all there is no reason to put everyone through a pitch process unless there is an issue that cannot be solved through other means. But I always cringe when I hear a marketer criticise an incumbent when talking to a potential new agency.

You can see the prospective new agency feels this is a sign that they are liked and trusted and being taken into the marketer’s confidence, and it is all that. But the fact is that like a cheating partner, if they do that to their current partner they will most likely do the same to you eventually, when the flame of desire burns out.

5. Is this about value or simply cheap? So listen carefully for the first things that they talk about because if it is rates and remuneration this is simply a financial transaction.

Value is quality + quantity / cost. But if the conversation starts with cost before you have even determined quality or quantity then it is likely to end there too.

Sure price and cost are important, but if they become the dominant or only factor then simply sharpen your pencil and if successful get ready to defend the relationship on price, because there is always someone who can do it cheaper. Maybe not as good, but the price is ultimately the bottom line.

The problem is that the person you are talking to does not see you or what you have to offer, you are simply a commodity and there is plenty more of that commodity out there. So if not you, then someone else will deliver the goods at a lower price.

6. Clarity of objectives reflects clarity of purpose. If they cannot describe what success looks like it is also likely that they cannot see your place in that success.

There is nothing like failing against obscure or opaque success objectives. You have failed. You feel like a loser. Yet you are never really sure why. Or even what you could have done to avoid it. This is the beauty for a buyer that has no clear view of what they actually want or need or desire to succeed.

On the surface it can offen sound like a reasonable list of objectives, but what becomes clear when you analyse what they are saying is that each point is rather vague and general, giving plenty of wiggle room for them to wiggle out of the deal due to your failure to deliver the desired success.

7. Communication is the foundation of successful collaborations. But if they resort to using industry jargon and ‘weasel’ words that require deciphering it is likely they are covering up that they don’t know what they need.

There are certain industries that are more prone to this behaviour than others, including the IT industry, financial services and telecommunications. Having said that weasel words pervade almost all levels of business.

The best indicator is the heavy use of the TLA that has you diving to the Google acronym dictionary trying to follow what they are saying. The fact is that people who rely on jargon are often hiding the fact that they are either unsure or insecure in regards to their needs.

Being unclear in communication is a reflection of being unclear of thought and intention. If you find it hard to understand what your potential new client is saying, what chance do you have of being able to work with them to deliver their requirements?

8. Finally in the words of David Ogilvy, never have a committee as a client. But committees come in all shapes and forms so if you find yourself talking to someone who can’t make a decision? That is a committee.

Big organisations are filled with committees that have no power to say yes, and plenty of incentive to say no. This means that you could find yourself reporting to people that will send you around and around with feedback and revisions until you lose the will to live.

An automotive client we worked with had a peer approval process that had the agency concepts approved through a succession of layers within the organisation. Finally the most banal and compromised concepts were presented to the senior marketing leadership, who invariably and rightly rejected the concepts and sent the agency back into the development process again.

The sad part is that they complained about the fact the agency charged them for the wasted concept development hours and ultimately sacked the agency because of the poor quality of work. Death by a thousand paper cuts.

Your time and energy is too valueable to waste on clients that simply chew up agencies and spit them out. Look for the signs and if you see one think carefully about going any further. See two and stop and walk away. If you see three or more then turn and run.

If you don’t then don’t blame anyone but yourself when you have been chewed up and spat out. 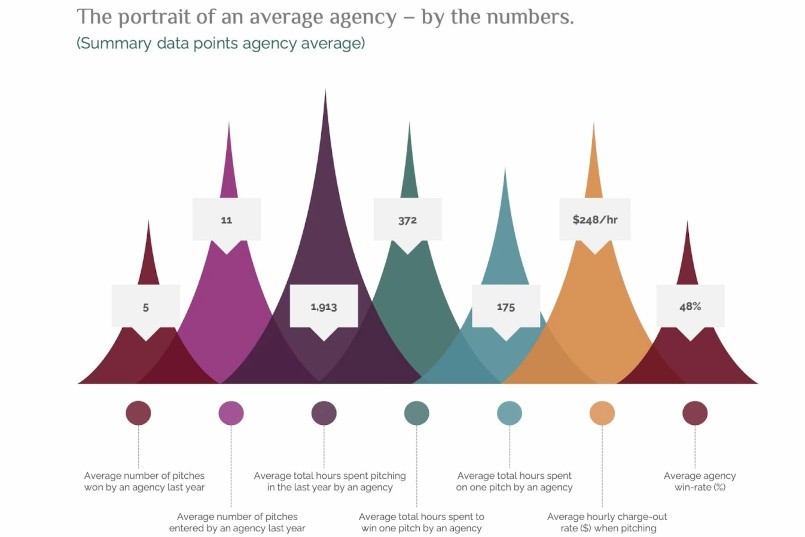 Why the hidden OUCH! Factor cost of advertising agency pitching is not financial

If your agency cannot be different, then at least try to be distinctive

Are agency people embarrassed about how they make their living?