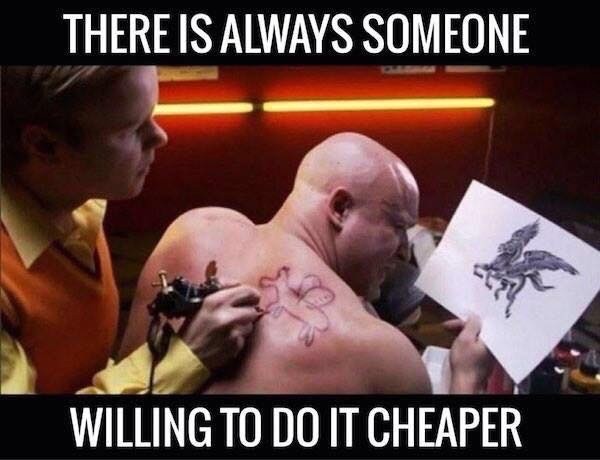 The saying goes, “You get what you pay for”. But recently we have noticed that some marketers have an expectation. They think they can get more than they pay for every time they go to market.

It is hard to tell if this is due to the fact that the services on offer have no measurable value and therefore have no value or if it is because like a magic pudding you can simply keep cutting costs to zero and still get the value you demand.

“I want a better agency at the same or less cost”

I had an interesting conversation with a retail client who was complaining that their current low cost, no frills agency was under-delivering on the key areas of strategic input and creative output.

The client was relatively happy with the agency throughput of work but wanted to find an agency more able to handle their increased expectation for strategy and creativity. In the briefing stage they understood there would be a cost implication as a better quality strategic and creative agency usually costs more.

A tender was undertaken with suitable well credentialed agencies and when the final preferred one was chosen the client was shocked that the agency was on average 20% more than they were currently paying.

Against benchmark for a mid to high quality agency they were at the lower end, but the preferred agency was definitely more expensive than the incumbent, who had performed poorly in the tender, being outclassed by the better quality agencies.

Interestingly even the incumbent had priced their proposal higher then they were currently being remunerated, indicative of the low rate they were currently paid.
No matter how much we explained the dynamic and offered them the option of the incumbent if that is all they wanted to pay, they believed that the preferred agency would lower their price to win the business. And sadly they did.

“Since we reduced the agency fee the service has been terrible”

Another marketer called to share that the quality and attentiveness of the agency service was appalling and that they had tried everything to no avail. They were determined to take the account to tender and wanted to know if we could help.

In discussions with the marketer and the agency it was clear there were significant issues in the relationship, which had become toxic to the point of no return. However, it was not until the marketers had provided the scope of work to be tendered and we were able to benchmark it that we discovered the incumbent was being paid less than 50% of the benchmark fee for the scope of work they delivered.

It was no wonder that the agency was unable to attract quality people to the account or hold people on the account when there was so little money to pay staff and make any sort of margin on the fee.

Ironically when confronted with the low agency fee, the marketers firstly blamed global procurement who had negotiated the new lower rates with the agency eighteen months earlier. But more frustrating was the fact that they stated that any new agency would be required to meet or better these rates to be successful.

“Look how much more I get with the incumbent agency”

In rationalising the creative agency roster for a major consumer goods advertiser, the shortlist of three included the incumbent at the advertiser’s insistence and two of the top credentialed agencies in the market.

In the process the marketing team had scored the two other agencies very highly, while the incumbent languished well behind. But the marketers wanted to keep the incumbent in the process, against our advice, simply to ensure their focus on the current work.

Having benchmarked the proposed scope of work for the next 12 months we put the templates to the three agencies to prepare their proposals. The proffered agencies came back with proposals on or slightly above the benchmark, while the incumbent was less than half price.

In reviewing the agency proposals with the marketing team they could not get past the fact that if they chose the incumbent they could get all of their work done for less than half price.

It took a substantial time reviewing the incumbent’s performance prior to the tender and at each stage of the tender, before they realised that if they took this option they would not achieve their objective of improving the quality of the creative output on their brands.

There is always someone who can do it cheaper

The fact is there will always be someone who can do anything you want for less money.

The questions you need to ask are:
1. Will it be to the standard required for the task?
2. What are the risks of under performance?

When the evaluation is as one-dimensional as the price then the assumption is that the answer to these questions are yes and none respectively. But the fact is with such large investments in media, advertising and marketing, these questions require more than just a cursory glance and actually require significant consideration up-front and throughout the tender process.

Often the focus of the marketing team and the procurement teams are disconnected. Marketing is often focused on relationships and quality of people and procurement is focused on cost and risk. But each has their own language and ways of assessing the parameters they are focusing on.

In actual fact you need to ensure that both quality and cost are assessed equally to determine value. Even better is the option of embracing performance, incentive or value based remuneration, where rather than just paying for the cost of the services, you reward for the delivery of the quality of those services.

Otherwise you could end up with exactly what you are paying for and either have to live with it or pay a significant price to have it removed or fixed.

TrinityP3’s Agency Remuneration and Negotiation service ensures that the way in which you pay your agency is optimal. Details here