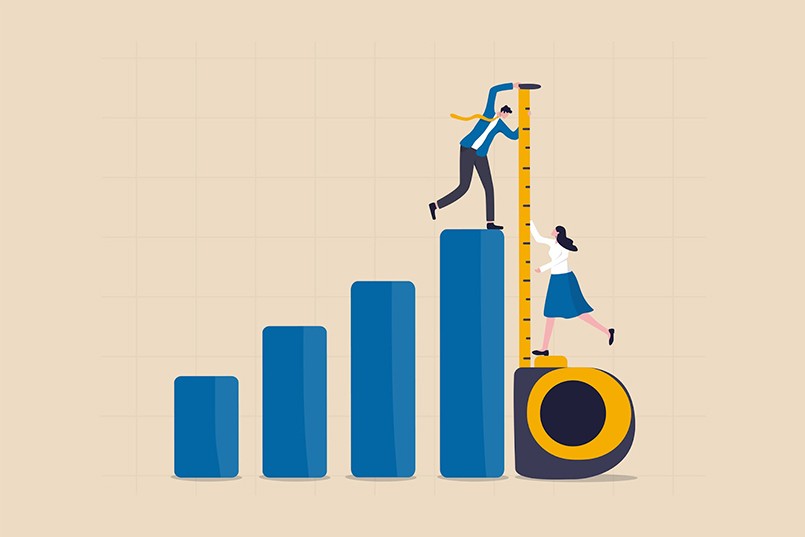 This post is by Nick Hand a Senior Consultant at TrinityP3. Nick has over 20 years of experience in advertising agency finance and operations. His expertise and knowledge cover the spectrum from large multi-national operations down to the boutique creative shop.

Benchmark. It’s a term we use a lot at TrinityP3, and the concept underpins much of the work we do and the recommendations we report to our clients. But it’s also a term – the word and its application – that is often misunderstood. Let’s try and set the record straight.

The origins of the word are said to date back to the 1830s when surveyors used to chisel marks in the ground or another structure to denote the point where their equipment (which included a ‘bench’ like apparatus) should be positioned in the future to ensure a consistent reference point for the surveyor’s readings.

Over time, the word took on its current dictionary meaning: A standard or point of reference against which things may be compared (with thanks to Oxford English).

However, as often happens with language, the meaning has broadened beyond the strict dictionary definition, and come to mean different things to different people. The Xerox Corporation is often given credit for pioneering benchmarking in business during the 1970s and ’80s, comparing its manufacturing costs and product features to competitors. Some understand it to be an arithmetic average, others a statistical median, or perhaps even a maximum or minimum value that shouldn’t be exceeded. And whilst there’s nothing inherently wrong with that (that’s how language, in particular English, evolves) it can cause confusion and miscommunication when two parties ascribe two different definitions.

What does Benchmark mean to TrinityP3?

Throughout many years and countless thousands of commercial remuneration reviews, TrinityP3 has collected data pertaining to rate cards, retainers, and resource level requirements for many different Scopes of Work and marketing outputs & outcomes.

Aggregation and analysis of this data has enabled us to assess a “standard” for each of these elements – the most common response we see in the marketplace.

But just like agency/marketer relationships, there is no “one size fits all” standard. Many of the benchmarks will vary based on agency tier (e.g. large multinational vs. boutique independent); advertiser size and complexity (e.g. big multi-brand FMCG vs. single brand retailer); and, particularly in the media buying sphere, channel complexity (e.g. bulk buy “traditional” channels vs. high touch, high iteration online channels).

And of course, agency responses will vary; there are as many ways to approach a marketing problem as there are agencies willing to help solve the problem, and this is where the waters get muddied. Poll 3 different agencies on their hourly rates, for instance, and you will invariably get three different responses for the same services.

For ease of illustration, we’ll ignore the impact on agency fees of the number of resources utilised to complete a Scope of Work or set of outputs & deliverables, and assume they all suggest the same.

Let’s say Agency A’s rates are 10% under the benchmark.

Agency B’s rates are 10% more than the benchmark

Agency C’s rates are in line with the benchmark.

That means Agency A should be the first choice because it’s cheaper, right? And Agency B’s rates should be negotiated down to at least Agency C’s level – if not all the way down to Agency A?

It is important to remember that any variance to the benchmark is not automatically a bad thing. The purpose of the comparison is to show where an agency’s submission sits in relation to the majority of the market. Rates above benchmark simply mean the agency believes a premium is warranted for those people or services – the advertiser needs to decide if they believe there is value in paying that premium.

If out of all the agencies auditioned, Agency B seems the only one capable of dealing effectively with the marketing problem, then it may well be there is value in paying more. Agencies A and C may be cheaper, but if the Marketer believes they won’t be able to solve the problem (or at least not to the level B could) then that’s money wasted regardless of how much of a “saving” might be had with the other two options.

That’s not to say there isn’t scope to negotiate with Agency B. But beware of pushing too hard (insisting they need to match the cheaper option) because you may damage the relationship before it even starts – and wind up seeing less of the senior firepower that attracted them to you in the first place, and not getting the outcome you thought.

And that’s where the “value equation” comes into play; if you’re after an agency as a commodity, where any agency will do, then you shouldn’t be paying any more than the benchmark. But if you find a true partner agency where the chemistry is right, understand your business, and believe will add value, then maybe paying more than the benchmark is the correct decision.

Ultimately, to quote Oscar Wilde: a cynic knows the price of everything and the value of nothing; don’t be the cynic.