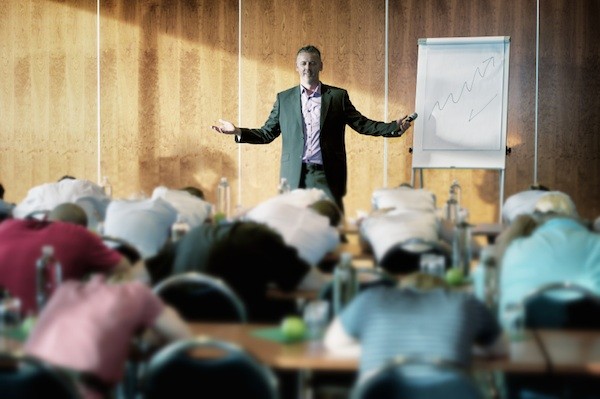 This is the industry whose mantra is:

Until it comes to presenting it seems.

Here are some prime examples of this poor time management in marketing and advertising.

Be it the chemistry session or the workshop or the pitch presentation, it seems that agencies are practically incapable of sticking to a schedule. While I do not abide by the consultant practice of having a large clock on the table and stopping a conversation mid-sentence to stick rigidly to a timeline, it is important, for fairness, that the schedule be adhered to by all parties.

When given an hour long meeting for chemistry and we recommend the agency present their credentials for 20 to 30 minutes and allow 30 minutes for questions and discussion. It is common for the agency to take the full 60 minutes, even when I have given them a gentle reminder along the way.

In one case I had to tell the agency to wind it up as they had talked about themselves for the full hour, never once acknowledging my attempts to remind them about allowing time for discussion. They were disappointed because they still had a number of slides to present to the client.

Almost invariably, spending so much time talking about yourself, without engaging the client in any way is not a great way to test chemistry or build a relationship and in almost all cases where the agency drones on and on they are unlikely to make it to the short list.

The conference and keynote presentations

Conference keynote speakers are hopefully imparting information and insights that the audience wants, but often they will go way past their allocated time. This has an impact on the audience. It also impacts the speakers following who are then under pressure to shorten their presentations to get the schedule back-on-track.

I have sat in conferences where the speaker has presented hundreds of Powerpoint slides while the audience gradually thins out. While the cause is often poor preparation and poor discipline, the impression is the speaker is largely selfish and self-centred.

My politically incorrect father says that “A speech should be like a mini skirt. Long enough to cover the topic yet short enough to hold your attention”.

I think history has proven him right. Arguably the most famous speech in history is the Gettysburg address, where Abraham Lincoln spoke 272 words in around three minutes. So you do not need to go on and on to make a point powerfully.

A lot of conferences will have panels, with a collection of speakers discussing a topic. If the conversation is open, diverse in opinion and flowing this can be quite entertaining and engaging. But more often than not they fall flat with panel members either hogging the discussion and pushing their own agenda or simply restating the opinions of the rest of the panel.

I made the mistake once of letting the panel have five minutes at the start to present their point of view on the topic as succinctly as possible. It was a 60-minute panel session and there were 6 panellist or agencies, marketers and procurement. I asked each to present a brief statement on their point of view to the topic to start. Perhaps 2 – 3 minutes max.

The first speaker, a well known marketer, spoke for 12 minutes before I had a chance to cut them short while in full flight. Although I asked the next speaker to be brief, they spoke for ten minutes. In the end we final two speakers had five minutes between them and we were out of time. Interestingly of those who got to speak, the marketers were the most verbose, the agencies a close second and the procurement people where short and to the point. I will let you interpret the insights here for yourself.

Ways of avoiding going on and on and on

The problem it seems to me is structure and content.

Too many people try to deliver too much information, to make too many points, with too little structure to their presentation. Lets look at each of these.

Preparation is important. No matter if you have five minutes to prepare or five weeks, you must use the time to plan the structure of what you are going to say. This applies to a five minute speech or a two hour presentation.

Ask yourself these questions: What is the audience wanting to hear from you? What are the main points you should make? How will you introduce the topic? How will you summarise what you have said? Having a structure is invaluable because it ensures you avoid going off topic, or missing a point or saying the same thing over and over again.

Without some kind of structure you can fall into the trap of not using the time efficiently and you will end up wasting everyone’s time.

Following on from structure is focusing and refining the points you want to make. I believe this is where the reliance on Powerpoint is a weakness. Many presenters who are inclined to run out of time are also inclined to have slides with a list of points they want to make. The first point is have one point per slide and speak to it.

Then they will have multiple slides with multiple lists of points. Multiple points on multiple slides quickly adds up. Imagine you have three points per slide and then four slides. That is 12 points you want to make. Right? Now if you are going to talk about a point for 3 minutes each, that is 36 minutes. Plus an introduction and a summary and you have a good 45-minute presentation.

Now, three minutes per point is not a lot of information. Going back to my copywriting training, in a sixty second radio commercial, you would write 100 – 120 words maximum. That means in 3 minutes you will communicate a maximum of 360 words per point – or one average size paragraph. So increase your time per point to five minutes each and you have 60 minutes just making your four slides of points. No introduction and no summary.

Another failing when using slides, is the habit of reading the slide and then spending the next three to five minutes or longer, saying the same thing again. This is particularly noticeable when the presenter has put all of the information on the slide.

Everything they want to show and say is on the slide. In many ways this negates the role of the presenter. So they simply read what is on the slide and then feel compelled to put it in their own words.

Far better to use the slide content as the headline and then tell the story behind the headline. One slide, one headline, one point and one story. Stories can be examples, case studies, anecdotes or simply a story.

Using your structure you can then map out what you want to say and then the points you want to make to say it. You can use each slide to headline the point and then allocate enough time to engage the audience with the content rather than simply restating the slide. And you can plan to make as many points as you have time for rather then trying to cram as many points as you can think of into the time allocated.

Bring back the Gong Show

Back in the 1970s there was a very popular talent show called The Gong Show. I believe the President of the United States of America Barack Obama was once a contestant on the show.

As a contestant you would perform in front of a panel of three judges. The judges had the right to ‘gong’ you out of the competition if you were boring, bad or stupid. If you made it to the end of your performance you were then judged and scored.

As you can imagine, the performances were diverse, from the bizarre to the brilliant. Perhaps if we introduced the concept of The Gong Show into industry conferences, presentation and pitches, it could be a way to get people to lift their performance and prepare more thoroughly to stick to their schedule.