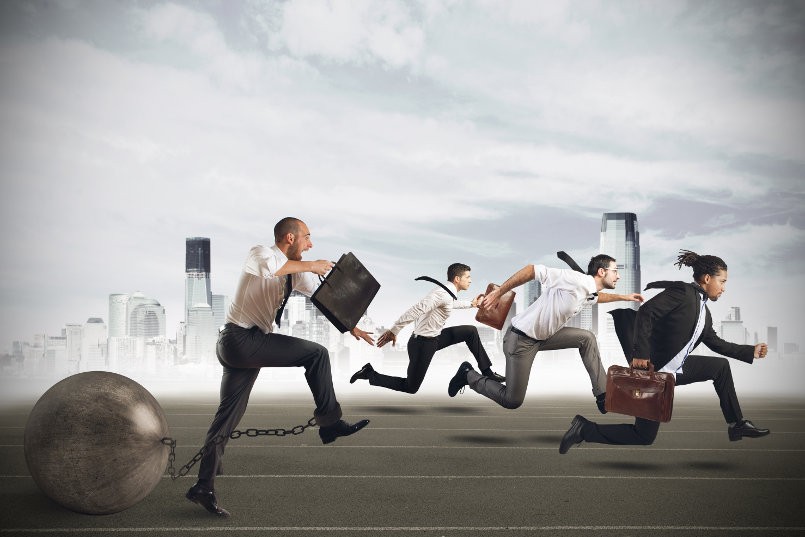 There is an increasing incidence of what are often referred to as ‘statutory’ or ‘regulatory’ or ‘compulsory’ pitches. This is where the agency contract term is at an end and it is a statutory requirement or regulation or simply compulsory to take the incumbent agency to market. But when we argue this approach is disruptive and a waste of time we are confronted with the response that “if the incumbent is good enough then they will retain the business”.

This is an assumption that is just simply wrong.

While that argument may seem logical, the fact the incumbent retains less than one in four pitches. Some put the number at a lot less. Combined with the fact that agency tenure is reportedly shorter than ever before it is either that most agencies are hopeless (in which case why appoint them in the first place?) or there are factors working against the incumbent retaining the business.

We believe there are three strong factors working against the incumbent’s success, even when the existing advertiser / agency relationship is strong and when the tender is statutory, regulatory or compulsory.

New agency. New personnel. New offering. Okay perhaps the same offering just packaged in a new way. It is certainly alluring for many marketers. Even though they like their existing incumbent agency and give then 9.99 on their NPS equivalent survey, the fact is that when comparing side by side the worn but comfortable slippers against the brand new shoes, the shoes have a powerful appeal.

Even though you know that you will need to break them in and there will be pain associated with the first few outings, this is overcome by the reaction to those around you when they hear about your new shoes.

There is also a distinct impact of FOMO here. As each new agency parades their new people and their new offerings there is a sense of wanting and in fact needing it all just in case. Even though you may not need it. Marketers are plagued by the fear of what if my competitor has this agency and I miss out because I stick with my incumbent who do not have this new offering and is populated with only the people who have worked on my account for the past three years.

This is exacerbated when there are many alternative agencies under consideration, because this just means there are more new things on offer and separating them from each other becomes more and more difficult as the marketer is left with the aching feeling they want it all.

2. Someone can always do it cheaper

When you get down to the business end of a competitive tender, this is where it gets interesting as we have often seen agencies, especially media agencies, try to buy the advertiser’s business. This could be done in a number of ways including:

It looks attractive and is usually completely unsustainable, but they are hoping to win the business and then find other ways to make it pay.

This is very attractive and plays into the objectives or those marketers and their procurement teams who are trying to lower the costs as you can see in this industry poll we ran.

How lucky is the marketer who not only gets the new agency offering the world or new everything and at a fraction of the cost of the incumbent? But while logically if it is too good to be true it probably is, it appears logic can sometimes play no role here and the new agency is taken on their word and face value to deliver the savings desired or mandated by the CFO.

This does not just relate to fees, in the case of media, where often agencies are asked to provide media rates for comparison. To demonstrate the flaws in this overall strategy we had a client run a tender where one agency promised ridiculous media rates, which we flagged clearly as undeliverable.

This warning was ignored and the media agency appointed only to have the client contact us three months later when the agency confessed it was undeliverable. They asked for their options, which we explained were:

3. The incumbent is handicapped

Where is the opportunity for the incumbent in all of this? Previously we have shared how the incumbent can play to the strengths of their position here. But in fact the incumbent is in a very difficult position to address either of these first two points, especially if there is a good existing relationship and the tender is simply for regulatory, statutory or compulsory reasons.

If the advertiser genuinely likes the agency and it is performing well then how can the incumbent reinvent the offering to counter the newness of the alternative agencies without risking throwing out the very things that the client actually likes about the existing relationship?

Plus, if the incumbent simply repackages existing services to make them look new, won’t the advertiser see straight through the ploy, whereas with the alternative agencies, they have no transparency into how that ‘proprietary’ system on offer actually works.

What if the incumbent has a new offering that they have not previously offered the client because it was never requested or discussed? Would the incumbent be called on to explain why they have withheld such an offering?

Now lets get to the issue of fees. If the incumbent suddenly offers the fee at a significant reduction to the current arrangement, would the client not think they perhaps they had been over paying all this time? And what is the point of cutting your margin to being unprofitable simply to keep the client? Which is what many incumbents do when they believe the account is about to walk out the door.

Effectively if they offer to retain the account for half the current fee then all the alternatives will be asked to match or better this to win the business. It is called poisoning the waterhole so the next agency struggles to make the business sustainable. And if they don’t, then the incumbent could retain the account for three more years but at a much reduced profit and service level while the agency perhaps makes money on the media side.

If procurement and marketing are simply doing this to reduce fees then they have a win in the short term but no matter if they stay or go it is at a significantly reduced level of service and performance.

Of course if the advertiser is determined to go to tender or pitch they need to consider if they include the incumbent in the process, which we have explained here.

But advertisers also need to consider if they really need to go to the trouble of a tender. Considering so few incumbent agencies make it through successfully for the reasons above, it could be that if the relationship is good and high performing but the need for a tender was a ‘statutory’ or ‘regulatory’ one, then the chances of this relationship getting through unscathed is low.

If there was a much less disruptive process to review your agency commercial arrangements to ensure they are competitive without going to market with a pitch or tender it would make sense, right?

Well there is. We have shared this approach previously here and it allows the advertiser to ensure they have a competitive and robust commercial arrangement to go along with that high performing relationship with their incumbent agency. All without the time and trouble of a pitch, which will more often than not result in a change of agency.

Do you need to review your incumbent agency? If so – don’t launch a pitch

According to this industry consultant, 84% of clients are wasting everyone’s time pitching