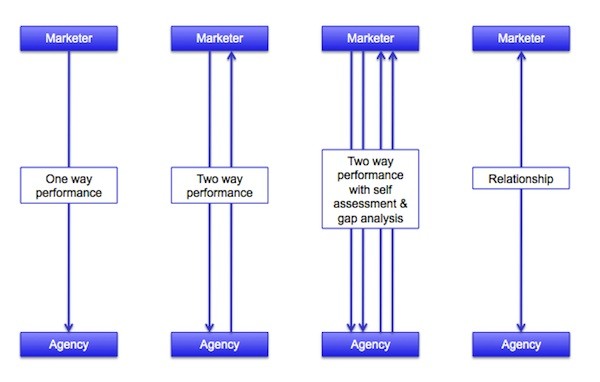 I was in a discussion with a UK based company about measuring their various agency relationships around the globe and I asked them “what is it that you want to measure? Performance? Relationship? Level of collaboration?” The fact is that they wanted to measure it all and were thinking that they were all one and the same.

But the more we discussed their options the more we began to realise that the term 360˚ used by some systems is actually misleading both from a functional and geometrical perspective.

The question is, does this measure relationship?

Assuming that marketers and their agencies enter into a relationship of co-creation where the outputs of that relationship is how well they work together, is it enough to simply score each other on the performance of each parties functional role? I think it is valid, but incredibly limited in the ability to provide improvement.

Then the confusion arises with the supposed 360˚ system in the third model (two-way performance with self assessment & gap analysis). These are commercial systems best applied for traditional supplier or vendor relationships, but have virtually no relevance in co-creation relationship. This does not stop them being popular, but what do they actually measure?

Firstly, self-assessment is seen to be flawed in medicine, human resources, psychology and behavioural science. Secondly, the gap only measures the difference in perception between the agency and the client on the performance of their tasks so on the basis you improve what you measure you could simply be changing the perception and not the reality of the performance.

And besides, has anyone noticed that all of the models above are based on a straight line? Which in geometry terms is 180˚ and certainly not 360˚

Measuring a relationship, the fourth model, is about each party providing feedback to each other against a common set of criteria that they agree defines the way they work together effectively.

As for a 360˚, only Evalu8ing has the ability to measure the performance, relationship and the level of collaboration across multiple parties within the many complex relationships we encounter today in marketing and advertising. In fact the complexity we find is business generally.